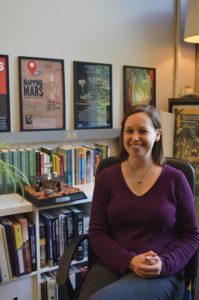 The Curiosity rover has been treading the surface of Mars for more than five years with a team of NASA scientists watching its every move. Part of the elite team of scientists working it is Western Washington University professor Melissa Rice.

The Curiosity rover launched at the end of 2011 and landed on Mars in August 2012. According to NASA’s website, Curiosity set out to answer the question: “Did Mars ever have the right environmental conditions to support small life forms, called microbes?” Early in the mission, Curiosity made news when it found chemical and mineral evidence to answer the question “yes.” And the rover continues exploring to find more evidence of past Martian life.

Life on Mars is a hot topic—witness 2015’s hit movie and Academy Award nominee “The Martian,” starring Matt Damon—putting Rice in demand as a public speaker. She always had a curiosity for planets and knew that she wanted to study them in college. Originally from the east side of Seattle, Rice attended Wellesley College outside Boston. After getting her bachelor’s degree, she went to Cornell for her master’s and Ph.D. She worked in Southern California at the California Institute of Technology just prior to getting involved with the Curiosity Rover project.

Even though NASA headquarters are in Washington D.C., Rice says it’s normal to have people work from afar. When you’re managing a rover on Mars, what’s another 3,000 miles between colleagues?

“There’s dozens of people all over the United States working for NASA,” Rice says.

While Rice isn’t with the team of scientists studying a planet 33.9 million miles from Earth, she is exploring the Pacific Northwest. Rice has been living in Bellingham for 2½ years and says she is still getting her bearings. She enjoys hiking and exploring the mighty hills on Chuckanut Mountain or kayaking in one of the numerous bays or lakes in Whatcom County.

At Western, Rice also teaches geology and physics in addition to her NASA work, a manageable combination, she says.

“It’s easy to still be a part of Western,” Rice says, “I teach and advise for undergraduate and graduate level programs, and have all the fun responsibilities as a professor.”

NASA has plans to launch a new rover in 2020, and Rice is helping build the rover’s camera. The new rover isn’t the only thing NASA plans on sending up to Mars. NASA is reportedly working to send a human there in the next 20 years, while billionaire innovator and entrepreneur Elon Musk plans to beat NASA to it. Game on? Rice isn’t sure. “NASA has been saying that for the last 50 years,” Rice says.

"NASA has plans to launch a new rover in 2020, and Rice is helping build the rover's camera. " 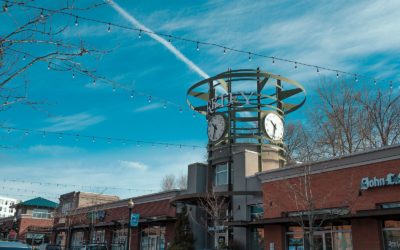