Noémi Ban has a story to tell. And tell. And tell. She is a Holocaust survivor who has been sharing her story with audiences since 1995. If living well is the ultimate revenge, Ban has gotten the best of the Nazis. At 94, she is a great-grandmother and still has a twinkle. On a winter morning, she’s sitting in her living room, warm and snug in her beige-white house banked with a cushion of new snow and a gaze-worthy view of Bellingham Bay.

Surrounded by light, you’d think the gray horror of Auschwitz would be long ago and far away. But Ban chooses to revisit it, relentlessly. A year after she and then-Western Washington professor Ray Wolpow met in 1995, she started touring local schools. Soon, she was giving 100 free talks a year. They figure she has given thousands of them. She has slowed, but only some.

She talks sitting alone on stage, no notes, just a glass of water. Each time, she swears she can still smell the smells and feel the thirst. When she was 21, she and her family (mom, 12-year-old sister, six-month-old brother, grandmother) were herded into cattle cars for Auschwitz. When they got there, she was directed one way and her family the other, never to be seen again. She remembers, she says, her mother’s last, penetrating look, telling her to take care. She talks of brown water for breakfast; soup with rotting vegetables for lunch, shared from a single container; people fainting with hunger and taken away for good. But worst of all was finding, from a guard, the fate of Ban’s and others’ “dear ones,” and seeing and smelling the chimney smoke every day.

The reaction to Ban’s talk is the same: silence. For nearly two hours (with one small break), her listeners are frozen in their seats. Schoolkids too.

“I was just in Granite Falls” she says, where she gave her presentation to about 250 eighth-graders. “They were all…” Ban makes the zipped-lips motion. “I am telling the most horrible things in the world. I am not making it beautiful.”

She is expressive and warm, a former award-winning sixth-grade teacher. She speaks with a Hungarian accent so thick you have to listen hard. She delivers her talk with pain and even incredulity all these years later. But most of all, she’s insistent. This happened. Remember this. Angry and upset about toppled Jewish tombstones and presidential administration-led targeting of immigrants? Think how Ban must feel. “It’s almost unbelievable, the behavior of this man and the group of people around him,” she said. “I can’t believe I am dealing with this now, this racism.”

But Ban sees something else too. “Not everyone is saying yes to this. People are speaking up,” she said. “That is freedom too.”

Her age means she doesn’t fly any more. She points to a bright-red, wheeled walker. “This is my Cadillac,” she says. Her wall calendar has at least two to-do items scrawled in every square for months. She still plays piano, and later tonight, she’ll turn on classical music. She loves life. One drill in exercise class has her punching air, one arm, then the other. “I think about the Nazis,” she says, impishly.

Ban is not discouraged. She doesn’t hate. “It’s very important to show that after what I went through, I can still be a human being.”

She is spanning generations. A Burlington teacher, once a rapt eighth-grader, recently engineered her return to his school. Will her thousands of talks be enough, when Ban and the last of the Holocaust survivors are gone? She has a feeling it might. Most times, when she’s finished with her horrible, hopeful story, a knot of kids surround her. Sometimes they ask for selfies. Then, inevitably, they ask if they can give her a hug.

"She delivers her talk with pain and even incredulity all these years later. But most of all, she's insistent. This happened." 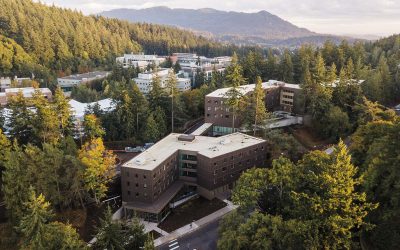 Honoring the Dead with a Celebration of Life