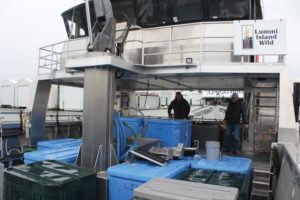 Lummi Island Wild is one of few fishing companies to practice the ancient and sustainable practice of salmon reef netting. Reef netting, used in the Pacific Northwest for thousands of years by Native Americans, requires fishers to wait for the fish to come to them rather than the other way around, said Lummi Island Wild president Keith Carpenter. A net is suspended between two platforms over an artificial reef. When “spotters” stationed on tall towers see salmon swim over the net, the net is lifted and the fish are rolled into a live well full of seawater. While in the well, the fish can relax and release lactic acid, produced by stress. Finally, the unwanted fish are sorted out, returned to the sea, and each caught salmon is bled before being put on ice. There are two major benefits to this method: sustainability and flavor. The practice allows Lummi Island Wild to avoid harming unwanted fish, use the same location every year, and keep their fish flavorful by bleeding each individually and eliminating the chance of catching stressed-out salmon.

Sustainability has been important to Carpenter and Lummi Island Wild partner, Riley Starks, since the company began in 2004, and it hasn’t gone unnoticed. In January of 2015, Patagonia sought out the company as their sole supplier of pink salmon for Patagonia Provisions, the company’s food division focused on sourcing products from sustainable farmers, ranchers, and fisherman. “They source from us because our pink salmon are so sustainable. Those guys walk the talk. They really do believe in sustainability,” Starks said. Not only does Lummi Island Wild partner with Patagonia, it counts upscale resort The Willows Inn and Microsoft as customers as well. And for the public, Lummi Island Wild fish can be purchased in Haggen stores, Whole Foods, a handful of coops, and online. While big commercial fishing companies may be faster, said Carpenter, quality is not as good.

The importance of the salmon species to the Pacific Northwest cannot be overstated for Lummi Island Wild fishers. “The salmon are to the Northwest as the buffalo were to the plains. They don’t have any left, but we do, and it is essential we keep it that way,” said Carpenter. Not only are the fish themselves a healthy and delicious food, but the salmon act as an indicator species for a number of ecosystems. Since the fish travel from forest, through rivers, and into the ocean, their well-being can indicate the health of a broad array of environments, Carpenter explained. Unlike most species, they do not spend their entire lives in one type of environment. “Supporting the salmon is a good way to support the entire Salish Sea,” Starks said.

"The salmon are to the Northwest as the buffalo were to the plains. They don't have any left, but we do, and it is essential we keep it that way,"

A Bigger Slice of the Pie

The Wilderness in Our Backyard 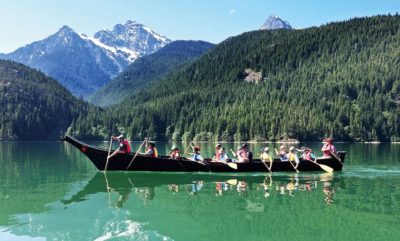