Here at North End Metro, we have sought to make women’s stories a regular part of our publication through our “Wonder Woman” column, which honors the achievements and contributions of women in leadership roles throughout Snohomish County. This issue we are pleased to expand that column into a special feature article, which highlights the ways five local women are making a difference. They are accomplished community leaders who actively work to help others reach their potential. We applaud their efforts, as well as the efforts of many other women like them who make Snohomish County a better place.

I Inez Bill, the rediscovery coordinator at the Hibulb Cultural Center and Natural History Preserve has taken on the formidable challenge of preserving cultural traditions that colonization sought to systematically erase.

“There was a time in our history when parents, grandparents, and aunts and uncles were the teachers,” Bill said. “But our history has been very difficult, with the boarding school and the different tribes moving onto Tulalip reservation—the Snohomish, Snoqualmie, and other allied bands that were moved here.”

A publication of the Hibulb Cultural Center, “Between Two Worlds: Experiences at the Tulalip Indian Boarding School,” describes in devastating detail the experiences of young Indian children who were removed from their homes, their families, their tribes, and their cultures, and forced to assimilate in American boarding schools. In 1893, Congress passed a law mandating Indian education and requiring parents to send their children to boarding schools under threat of punishment.

One of the publication’s contributors, Andy Fernando, writes of helping his aging mother, Violet Lyle Fernando, an Upper Skagit Indian and former boarding school student who is now in her 70s, recall the Skagit word for “salmon.” She remembers being punished for speaking the Skagit language with her schoolmates, so as a young girl she learned “not to do the things that were Indian.”

Andy Fernando writes of this grave cultural loss, saying, “I have learned my Skagit language not at my mother’s knee, nor from the teaching of my grandparents, but in a college classroom . . . It saddens me to think that because my mother was taught to block out her Indian-ness, my whole family has lost a piece of our cultural history.” He asks, “Who will show us younger generations how to be Skagits? What will we have to share with our children? How will we recognize the right medicines, make cedar canoes, find spirit power? How will we know how to say ‘salmon’ in Lushootseed?”

These are the kinds of questions that motivate Bill’s work in the rediscovery program. Through demonstrations, workshops, and lectures, she imparts knowledge of traditional practices, such as basket weaving, clam drying, berry gathering, and the harvesting and uses of native medicinal plants.

“I think the work is really important and vital for our people,” Bill said. “This is another avenue for passing on the lifeways of our people, which are important for our young people to learn.”

Virginia Jones, one of Bill’s coworkers and friends, said, “Inez is a cultural pillar of our community. She has always stood up to help uphold the traditional teachings and cultural values. She carries the teachings of many generations. During the time that I have worked with Inez she has encouraged me to spend time with our oldest teachers, the plants, and wildlife.”

As she looks to the future, Bill expresses concern over a range of environmental issues that threaten the lands and waters that are essential to the Tulalip Tribes. Conservation is at the heart of the Hibulb’s 50-acre natural history preserve. “These teachings and values are so important,” Bill said.

“They’re in every aspect of everything we do as a people. For example, preparing food for an event. I say when we’re sharing our Indian food, we’re not only nourishing the people that come to visit, but we’re also nourishing their spirits.”

She emphasizes that the rediscovery program involves much more than simply helping young people to acquire knowledge and develop skills. It’s also about passing on respect and reverence for cultural traditions and cultivating connections to tribal values and teachings.

Bill said, “It’s more than just the mechanics of making baskets, it is also about passing on the teachings, the values, and the histories that can be shared while we work. It’s important to learn to do these traditional practices in the proper way, in a way that reflects our culture, teachings, and values.”

Days for Girls Tackles a Taboo 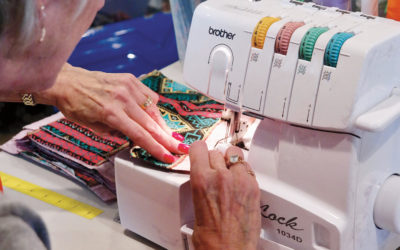 The Road to Recovery, A Reason to Rise