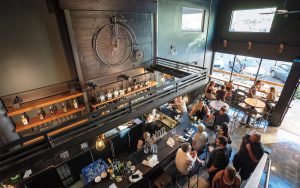 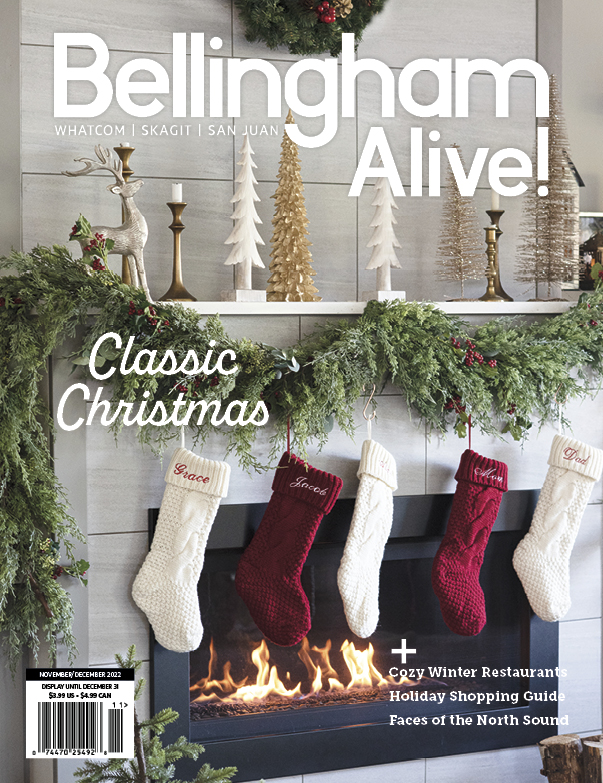 You’ve likely sampled a spirit or two from Chuckanut Bay Distillery, but if you haven’t yet tried their restaurant, you’re missing out on one of the best new additions to Downtown Bellingham’s growing culinary scene. Between craft cocktails and creative dishes designed for sharing, a night spent at the Penny Farthing Bar & Restaurant will be one to remember.

“From the moment we first purchased our building on Cornwall back in 2017, we planned to open a restaurant and bar that would showcase our spirits in cocktail form and complement them with locally-sourced dishes in a fun, welcoming atmosphere,” says Co-Owner Kelly Andrews. 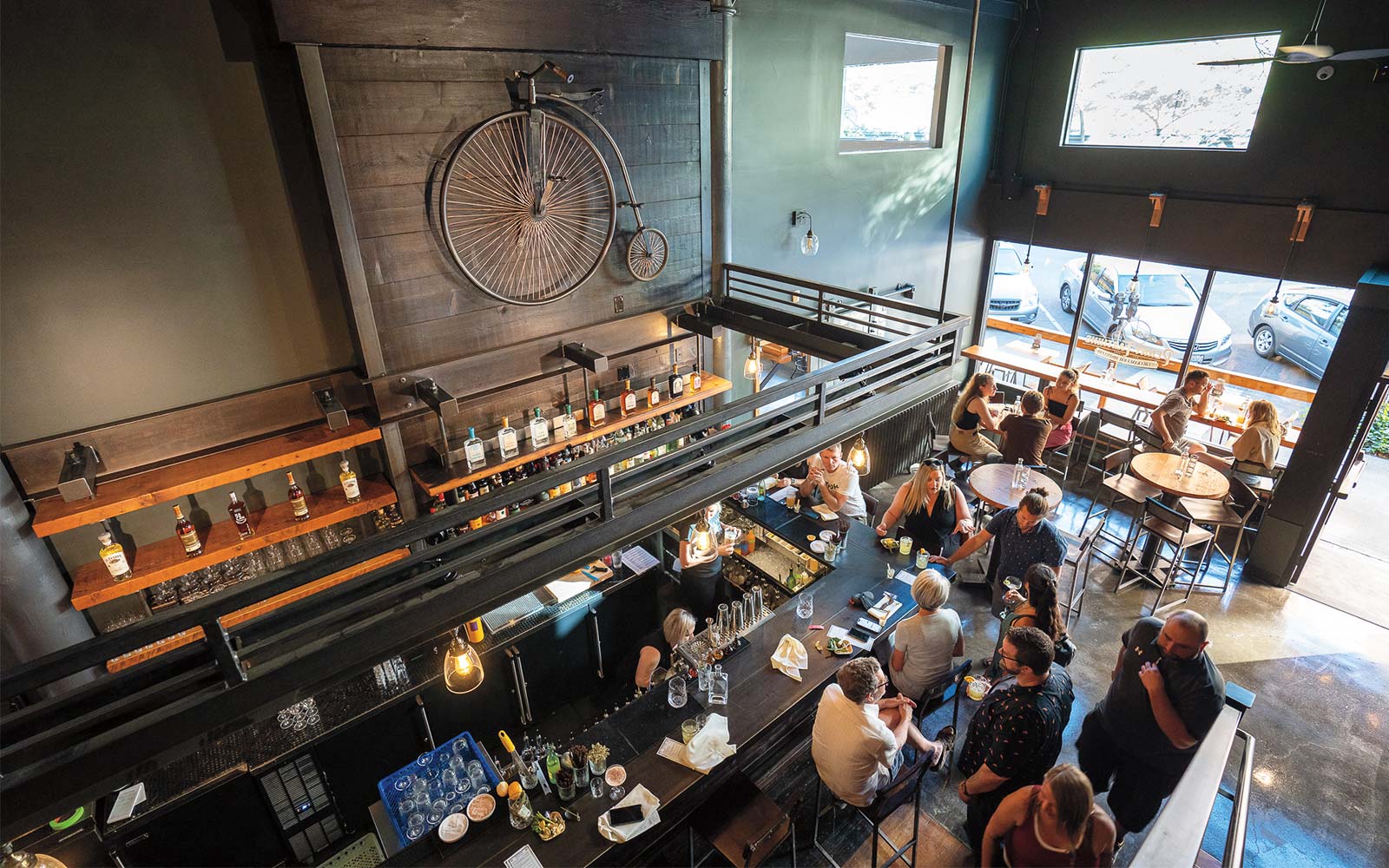 The restaurant (opened summer 2022) is located in the same century-old building as the distillery itself, giving tour guests a venue to further taste the spirits they learn about. The atmosphere strikes a fine balance between historic and steampunk: think warm old-growth wood finishes, reclaimed metal accents, and– perhaps the most eye-catching element of the space– an actual penny farthing mounted above the bar area.

The concept of the penny farthing, the first-ever machine to qualify as a bicycle, is a nod to Chuckanut Distillery’s history. Their first-ever vodka was produced using an apple grinder connected to a bicycle frame. Moreover, the building itself was once home to JCPenny until it moved across the street in 1960.

Given the Penny Farthing’s ties to the distillery, drinks are a focal point of the menu, and a glass wall in the first-floor dining area even gives guests a full view of the production area next door. When ordering, I recommend asking the waitstaff what drink would pair best with your bite; roughly half the menu consists of classic cocktails, whereas the other half are new inventions. I went with a classic Manhattan ($12), which was the perfect vehicle for Chuckanut Bay’s house-made 100% Rye Whiskey to truly shine. 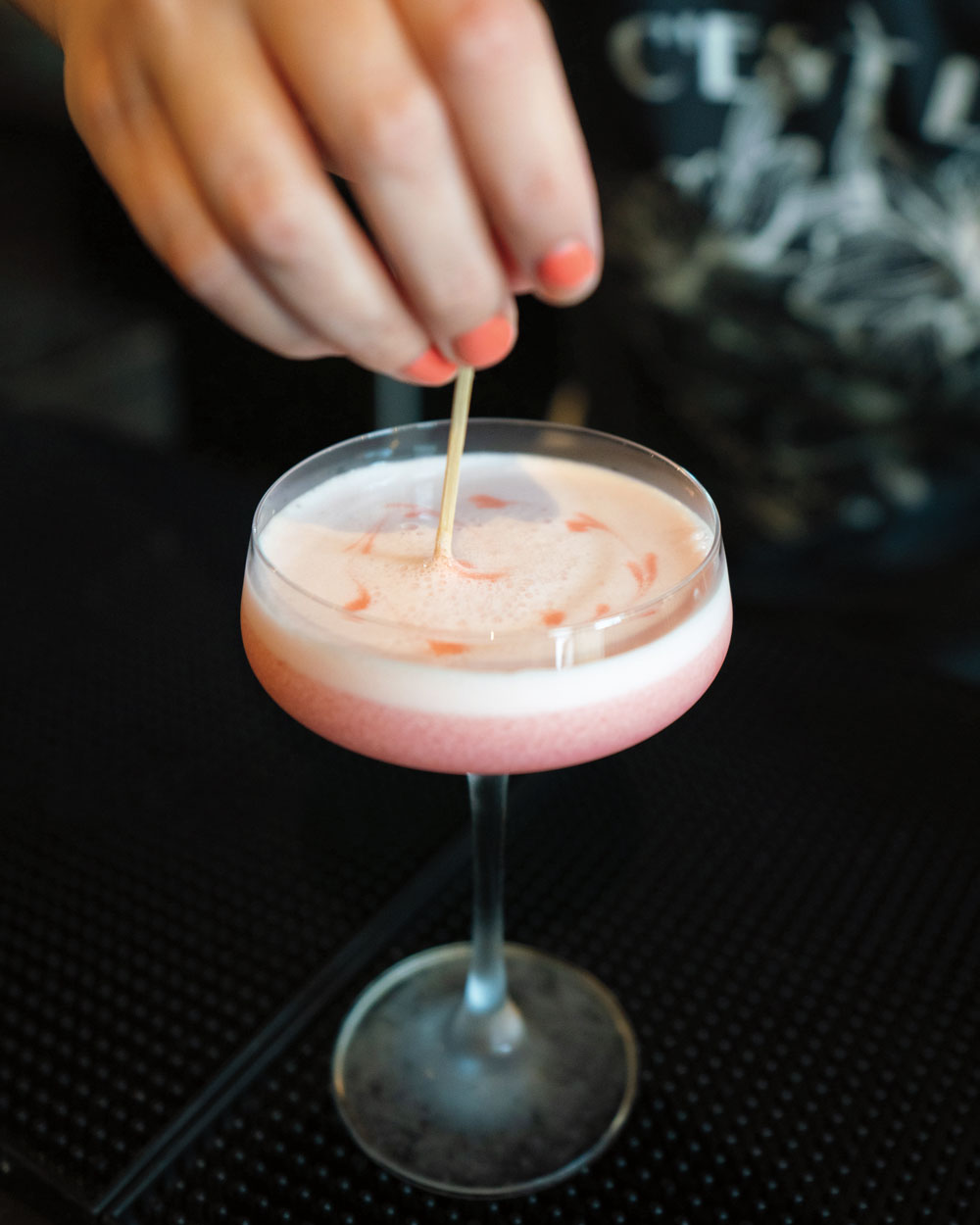 The idea of putting a modern twist on the classics extends to Chef Erik Szalamas’s food menu. It consists entirely of shareable plates, but make no mistake– “shareable” doesn’t necessarily mean tiny tapas. Rather, these dishes are generous in portion and unpretentious in spirit, and most of their ingredients are sourced locally (namely from Flynn Farm in Everson).

“Farmer Savannah Flynn and I teamed up at a farmer/chef mixer event in May of this year. At that time, I shared the ingredients I was planning to use on our Penny Farthing menu and Savannah kindly planted the seeds to harvest our ingredients,” says Szalamas.

The stunning Mezze Platter ($19) is an excellent showcase of seasonal veggies and fruits, marrying PNW produce with a variety of Mediterranean-inspired accompaniments. While grilled veggies and flatbread provide a satisfying crunch, this platter’s depth of flavor comes from its array of sides: hummus, marinated feta, olives, baba ganoush, and a rich raita cream (Indian yogurt sauce).

For a snack that’s both substantial and refined, the Filet Mignon Medallions ($22) are a must-order. Crisp crostini are layered with slices of butter-basted filet mignon and made even more indulgent through the addition of Whatcom County blue cheese and house-made beet pickled red onions. Best of all, Szalamas notes that the dish is meant “to satisfy those with refined pallets as well as folks enjoying shareable bites which pair well with our spirits,” namely bourbon and rye whiskey. 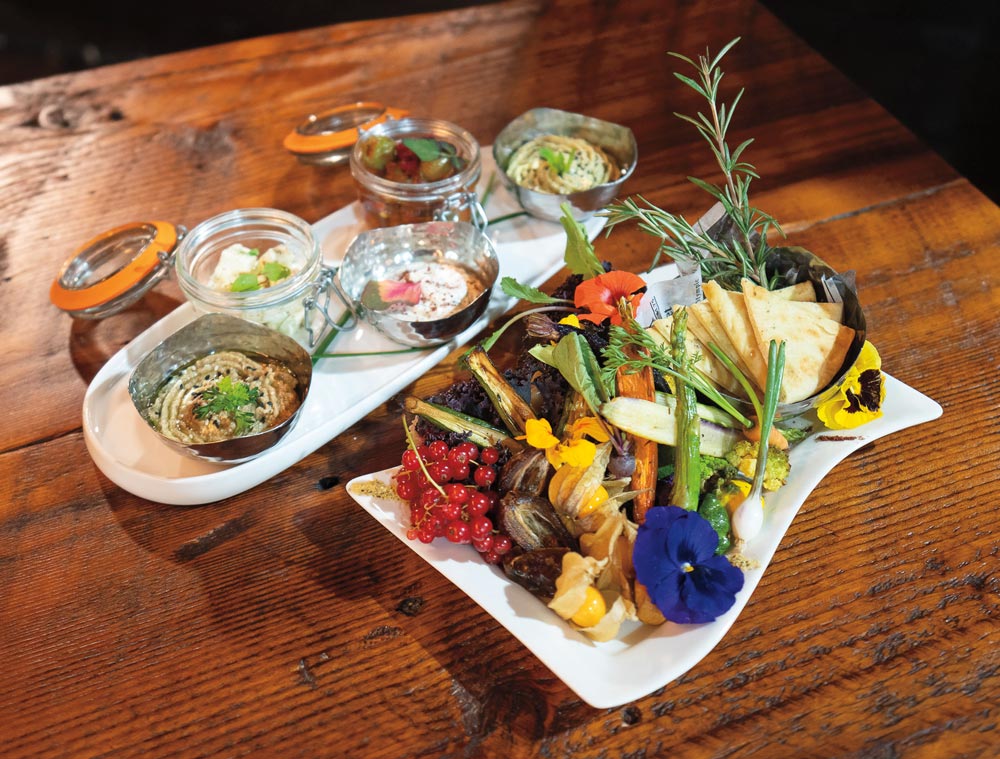 Other standout menu items include the perfectly charred Tuscan Ribs a la Rosticceria ($23) and the Roasted Cauliflower Steak ($18), which is garnished with golden raisins infused with Chuckanut Bay’s iconic Krampus liqueur.

Even the dessert menu is locally influenced, featuring a Spiked French Vanilla Custard Risotto ($12) made with Chuckanut Bay Bourbon-infused peach jam from 3 Generations in Anacortes. To keep things fresh, Szalamas will soon be adding a rotating dish to the menu.

Moving forward, Andrews notes that guests should keep an eye on the venue: Chuckanut Bay aims to open a third-floor event space in the spring and a rooftop bar with panoramic views in the summer. 1309 Cornwall Ave., Bellingham, 360.738.7179, chuckanutbaydistillery.com 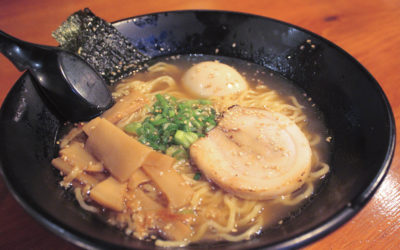 KEENAN’S AT THE PIER 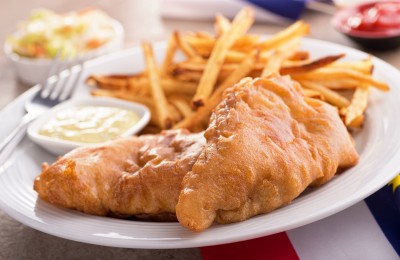